New Year's In Upper East Side 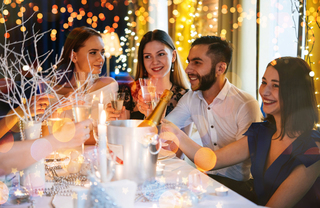 New York is known for its fabulous party scene and ability to celebrate like no other city on the East Coast. On New Year’s Eve things get even more exciting than any other time of the year as the festivities start getting underway on Manhattan. Just what will be going on around December 31st this year? Residents in areas like the Cole Apartments on The Upper East Side know to expect a bevy NYE spectacles, but for those that might not be aware of how fun New York City gets during this time, we’ve got the rundown on a few of the prime options that will be popping up around the island.

In 2013, Union Square’s SideBAR was placed on the list of The 25 Douchiest Bars In NYC. To quote Complex:

“It's the alumni bar for the Florida Gators, among other teams, and while it's gussied up to look like a decent lounge, it's really just another dive with plastic cups, inattentive waitresses and bartenders, and the kid whose football scholarship was revoked for possession.”

“Quietly predictable,” said New York Mag. The view of this place was middling at best. To hear SideBAR tell it themselves, though, they’re NYC’s “best sports bar,” and flash forward to the eve of 2018, the establishment is throwing an NYE bash to rival the best. Hosted by City Elite Group, the New Year’s Eve All Black Affair is going to rock NYC residents from 9PM on December 31st to 4PM on January 1st.

This epic party will feature a 4-hour open bar, along with music from DJ Showcrime, DJ TrueBlends, and DJ Cookz. The dress code, as the name would suggest, is all black, and decidedly upscale:

It goes without saying you’ll need to be 21 or older to gain access to this event, but for those that meet the requirements, head over to the event’s info page for details on how to score tickets (they range from $29.00 on the low end to $775.00 for the whole shebang) and get ready for a NYE spectacular that will be going all night long.

It is not at all uncommon for NYE to be filled with events for singles to congregate and get to know one another. Stitch Bar & Lounge provides a near-perfect spot for such mingling to occur:

“A haven for corporate parties, the expansive, bi-level Stitch sees big groups of 30-something Midtown professionals in khakis pour in to unbutton their starched collars and sip cocktails around its dark-wood, high-top tables.”

It makes sense, then, that this will be the spot for “New Year’s Eve’s Largest Singles Party,” held by New Year’s Eve Promotions NYC branch. Beginning at 7:00PM on December 31st, this party will be raging until 3:00AM on New Year’s Day. The event itself is advertised as the place to be if you’re young and unattached:

“Stitch plays host to our annual New Year's Eve Singles Party. With over 350+ singles in their 20s, 30s and 40s each year looking for a kiss at midnight. What better way to spend NYE than with other ready-to-mingle professional singles.”

They’ll have complimentary drinks for the first hour of the party, and appetizers served for that second hour. The party will include an “ice-breaker” event (with the chance to win some prizes) along with a photo booth to capture those special memories. Don’t forget the dancing — there will be a “Booty bumping mix of hip hop, R&B and Top 40 jams” played all night. For those who are coming in groups, they’ve even got a “VIP Bottle Service Package” that will allow you to skip the line and get straight to the action.

Dewey’s on West 30th Street is no stranger to being a happening spot for gatherings, or a place where elegance and convenience are prioritized:

“Enjoy being surrounded by 60” TV’s, crystal chandeliers, black tufted leather, and decorative antique silver tin ceilings. This is the perfect spot for you and 25-40 of your closest friends. With an elegant private room for you and your closest friends, a sophisticated sports bar, and a beautiful outdoor patio – it’s a trifecta of entertainment.”

For New Year’s Eve, they’ll be throwing their own spectacular, from 7:00PM until 4:00AM. The open bar starts at 9:00PM, and from then on, it’s going to be quite the party, with music provided by DJ Wallah, DJ Ominaya, and DJ Kidd. Plenty of fun and dancing to be had this evening, and several ticket tiers to accommodate whatever level of excitement you’re looking to get into that evening.

New York City’s Con Artist Collective was once dubbed “Space Of The Week” by New York Mag back in 2014. They’ve garnered a long list of press, along with a reputation for holding the very best when it comes to exhibitions, workshops, socials, and, yes, blowout events. New Year’s Eve will be no different, as they put on a gargantuan NYE party at their space on Ludlow Street:

“Come spend NYE with NYC's largest art collective and friends! Create your own masterpiece with our communal art supplies, dance and drink until we all forget 2017.”

The CAC NYE Party will have no cover charge, is open to the public, and will feature DJ sets by IRV OH. It’ll be an equally fun, but slightly more laid-back take on NYE for those that eschew the glitz and glamour of the classier party options.

Let The Cole Apartments Be Your Starting Point

Before you head out for the NYE festivities, you’ll need a place to get yourself ready for all the events. The Cole Apartments, located on Manhattan’s Upper East Side, provide that perfect starting point. Here, the residents enjoy spacious living units with the most upscale resident amenities, and start every adventure feeling ready to take on the world. For city living done right, be sure to check out what The Cole has to offer today.