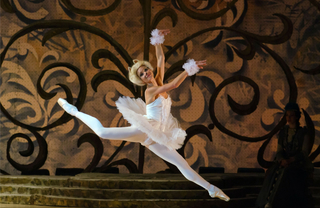 Do you love live performances? We know most in the Upper East Side apartments do, and if you count yourself among the group, the New York City Ballet’s upcoming production of Sleeping Beauty is going to be right up your alley:

“Taking the stage around Valentine’s Day, this enchanting full-length is one of NYCB’s grandest spectacles of dance, featuring luxurious sets and costumes, Tchaikovsky’s glorious score, and a cast of fantastical characters.”

Sound like your kind of show? Then join us, as we dive into all the details you’ll need to know before you head down to Lincoln Center Plaza for a magical evening.

What Is Sleeping Beauty All About?

While we’ve all likely heard the tale of Sleeping Beauty in one form or another, we’re willing to wager it’s been a fair while since you last saw the movie or saw it on stage, so let’s start with a quick spoiler-free refresher, complete with some interesting facts. Did you know, for instance, that Sleeping Beauty is (sort of) a French tale? It was first published by French author Charles Perrault in 1697, but it’s important to note that his version was influenced by Italian poet Giambattista Basile, whose work, Sun, Moon, and Talia was itself based on earlier folk tales.

It seems a fitting origin for this story of the ages, which tells of a cursed Princess who is fated to sleep for a hundred years before she can be awakened — by the kiss of a Prince. It comes to pass, and then drama unfolds after the Princess and Prince secretly wed. We won’t give away too much, but what will say is that the Tchaikovsky ballet (the version the NYCB is performing) is adapted from Perrault’s work, and follows some of the same story beats.

Officially titled The Sleeping Beauty, the ballet was scored by Tchaikovsky, with the plot and choreography being conceived by Ivan Vsevolozhsky and Marius Petipa, respectively. This version of the story begins with a prologue, followed by three acts in which the action unfolds. The prologue sets up many of the tale’s important characters: Princess Aurora, the King and Queen, the benevolent Lilac Fairy, and the evil Carabosse. Like the Perrault version of the tale, the Princess ends up pricking her finger, falling into that deep slumber, and waking years later upon her discovery by the Prince. That’s not the entirety of the production, obviously, but the general description should be enough to give you an idea of what to expect along the way.

And lest we forget, as you watch Sleeping Beauty, you’re likely to pick up on plenty of subtext and overarching themes in the narrative. Beyond the individual character interactions, there’s the classic struggle between the forces of light and darkness, a factor that will make itself known through both the actions of the characters in the ballet and the tremendous score.

The Music in Sleeping Beauty

You can find a synopsis of the music in The Sleeping Beauty, along with the story of how Tchaikovsky composed this master work, at the Tchaikovsky research page, but well cover some of the main points you’ll want to know about the music here as well. Tchaikovsky composed the score over a period from October 1888 to August 1889, and the result is one you’ll appreciate upon hearing in its entirety. While not as dramatic as Tchaikovsky’s Swan Lake, and not quite as endearing as his work on The Nutcracker, the music in Sleeping Beauty stands on its own two feet, delivering grandiose and hard-hitting symphonic sound that is still lauded today.

Interestingly enough, though, at the time Sleeping Beauty was first performed, not all were impressed. As the story goes, it left Tsar Alexander less than satisfied:

“Tsar Alexander III was distinctly underwhelmed at the gala rehearsal. Summoned to the royal box, Tchaikovsky related how ‘Very nice!’ was the royal response. Tchaikovsky noted in his diary — His Majesty treated me very haughtily, God bless him.”

Today, though, we’re awed by Tchaikovsky’s brilliance, and a performance of Sleeping Beauty by the New York City Ballet is one that you won’t want to sleep through.

What You Need to Know About NYCB’s Production

The original production of The Sleeping Beauty was a substantial four hours in length, but the New York City Ballet’s version is streamlined, covering acts I and II, which takes a little over two hours to complete. Even at this pared-down length, however, The Sleeping Beauty remains a grand sight, if for no other reason than the amount of manpower it takes to pull off:

“It is one of the most elaborate productions presented by the Company, requiring over 100 dancers, including students from the School of American Ballet.”

There’s drama, excitement, and impressive choreography galore when the NYCB takes the stage for this number, and you’ll be able to enjoy it throughout the month of February, as they put on multiple showings of this epic story. Check out the NYCB Calendar to learn about dates and how to purchase tickets, then prepare yourself for a stunning performance on your night out.

Will it be worth it? We’re confident you’ll be impressed, but if you require a bit more convincing, take a look at a few past reviews of the NYCB’s take on Sleeping Beauty, they’re nothing, if not glowing appraisals of the ballet’s skill and production quality.

If you’re looking for a fantasy experience, look no further than The Cole, the luxurious residences that deliver on the fairytale New York lifestyle you’ve been after. What awaits you? How about spacious domiciles, designed for superior comfort and convenience, along with proximity to many of Manhattan’s happening hotspots? That’s just the tip of the iceberg, though, so be sure to check out everything that The Cole has to offer, learn more about our apartments and availability, then make this your entryway to the NYC of your dreams.