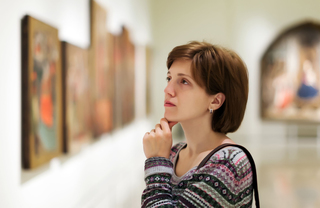 For art aficionados around New York City’s East Side apartments, spring is the signal for one thing above all others -- the coming of fresh new exhibits at their favorite galleries and museums. New York is renowned for great art, a city with a long history of inspiring creativity of all stripes.

It’s also home to notable institutions like The Modern Museum Of Art and the Metropolitan Museum Of Art, to name a few, and these museums continually change up their displays with fresh art and numerous classical works from antiquity.

Spring 2018 will be no different in that regard, so we’ve rounded up a few of the exhibits that will be coming this season to provide you with some inspiration as to what you art lovers might want to go out and see. Read on, as we cover some of the city’s heavy hitters, along with a few locations you might not even have heard of before.

20th Century American painter Grant Wood is best known for his iconic work -- American Gothic -- the dual portrait of a farmer, holding a pitchfork, and (presumably) his wife. Those who have studied Wood’s career, however, know that his body of work extends far beyond this single work.

From March 2nd to June 10th, the Whitney Museum Of American Art will be displaying Wood’s most famous piece, along with lesser-known (but no less extraordinary) paintings from his extensive portfolio during their Grant Wood: American Gothic And Other Fables exhibit.

The exhibit will cover portraits, murals, landscapes, and more, including pieces like Arnold Comes Of Age, Farmer With Pigs And Corn, and Stone City. This exhibit promises to be an interesting one, and, as The New Yorker notes, an exploration into tumultuous 1930s America:

“This retrospective of the Iowan painter fascinates as a plunge into certain deliriums of the United States in the nineteen-thirties, notably a culture war between cosmopolitan and nativist sensibilities...Wood was a strange man who made occasionally impressive, predominantly weird, sometimes god-awful art in thrall to a programmatic sense of mission: to exalt rural America in a manner adapted from Flemish Old Masters.”

The museum will hold guided tours of the displays daily throughout the duration of the exhibit, and special events as well. Among those events, the after-hours tour for Contemporaries and Contemporaries Patrons on Wednesday, April 25th. In addition to an in-depth look at the art, the tour will also include a wine reception before and after the tour times (7:45PM and 8:15PM).

“Just how perfectly should figurative sculpture resemble the human body?” This is the rather poignant question posed to us by the Met Breuer, whose new display, Like Life: Sculpture, Color, And The Body, will attempt to answer from March 21st to July 22nd.

This is an international loan exhibition, featuring 120 works drawn from The Met’s worldwide collection of European art, along with separate museums and private collections. It will include sculptures from a substantial list of artists, which include:

Their hope is to “highlight the continuing anxieties and pleasures attendant upon the three-dimensional simulation of the human body,” noting that, in the practice of sculpture, at least, there has been an “age-old problem” with realism. With this exhibit, the strategies artists have used to address that problem will be brought to the fore, waiting for examination from art aficionados like yourself. You can catch a preview of the exhibit here.

The title of this exhibit is fairly straightforward, and those who have followed The Museum Of Modern Art’s history know that their New Photography series pops up about every two years to showcase fresh work. The 2018 installment, titled Being, “asks how photography can capture what it means to be human.” From the exhibition page:

“At a time when questions about the rights, responsibilities, and dangers inherent in being represented—and in representing others—are being debated around the world, the works featured in Being call attention to assumptions about how individuals are depicted and perceived.”

You’ll find the boundaries of convention being pushed to, and even past, their limits here. Many of the featured artists have employed innovative photographic techniques and post-processing tactics to surprise viewers in new ways and break into new artistic territory.

** **May 3rd - October 7th** Most know of Stanley Kubrick’s amazing work as a film director. The Museum Of The City Of New York’s upcoming exhibition, [Through A Different Lens](http://www.mcny.org/exhibition/through-different-lens), will give audiences a chance to see some of his early work -- as a photographer for Look magazine: “In his photographs, many unpublished, Kubrick trained the camera on his native city, drawing inspiration from the nightclubs, street scenes, and sporting events that made up his first assignments, and capturing the pathos of ordinary life with a sophistication that belied his young age.” The exhibit will contain more than 120 photographs, drawn from an “unparalleled collection” of 129 photography assignments and over 12,000 negatives. For educators, there will be a guided tour on May 16th, led by curator Sean Corcoran. For fans of Kubrick, the entire exhibit is one that is not to be missed.

Live Amongst These Great Works At The East Side Apartments

While not a museum, amazing communities like The Cole are like a work of art unto themselves. Few buildings can match the beauty of this edifice’s exterior, or rival the superb interior design. Then there are the views of the city -- almost like gazing into a masterfully crafted urban landscape. See it all for yourself. Check out The Cole today.