T-Rex At the Museum 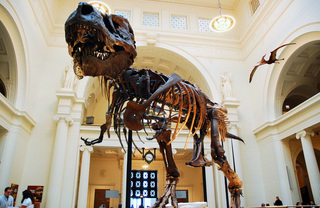 Whether you first heard about the t-rex from watching Jurassic Park or have been fascinated with dinosaur documentaries from an early age, there’s nothing like seeing history’s most gruesome predator recreated in-person. The American Museum of Natural History is a short trip away from any of the NYC apartments for rent, giving you the perfect opportunity to see this creature like never before.

In honor of the t-rex’s incredible popularity and spot in a history as the biggest and Baddest dinosaur, we’ve put together a series of fun facts. How many of these did you know about the t-rex?

There are Multiple Evolutions of the Tyrannosaur

While the t-rex may be the most popular dinosaur, tyrannosaurs actually came in a variety of shapes and sizes throughout history. Spanning just over 100 million years, Rex’s ancestors began as small and agile hunters. Far from the kings of their time, these tiny meat eaters relied on their scavenging skills to stay alive.

The t-rex appears towards the end of that 100 million years, showing how a small scavenger could slowly evolve into the top predator that ever walked the Earth. The museum’s display shows all sorts of tyrannosaur incarnation spanning those years, giving visitors a unique insight into the evolution of a dinosaur species.

They Grew at an Incredible Rate

The display portrays the various lifestyle stages of a t-rex. There’s a recreation of a fur-covered hatchling, a four-year-old juvenile, and plenty of adults for size comparison. When fully grown, the tyrannosaurus rex weighed between six to nine tons standing nearly 20 feet tall and 40 feet long.

While viewing the hatchling and juvenile, you might wonder how they grew to be so massive in just a short time? Gaining a metric tons a year seems like an impossible task, but juveniles hitting their growth spurt could gain anywhere from 1.6 to three-thousand pounds in a single year. That’s an over 4.6 pounds per day minimum.

Thanks to recent fossils showing off more what dinosaurs in the Cretaceous Period actually looked like, scientists now know that nearly every one of them had feathers. That includes the t-rex, and the American Museum of Natural History’s exhibit shows this feature off.

Based on recent findings, their recreation of this massive beach features patches of feathers on the head, tail, and elsewhere. It’s a new look for the beast, but one that’s more historically accurate than previously thought. Fossil specimens, CT scans, and microscope images in the exhibit will help you learn more about how scientists came to this conclusion.

The T-Rex Live in America

Tyrannosaurus Rex lived right here in the states. While they might not have ventured as far as New York, numerous skeletons have been uncovered in Montana. The continent looked completely different at the time, with the US being part of an island landmass called Laramidia. While other island continents and landlocked areas of the time also had large beasts, only what is now North American soil was the stomping ground for the t-rex.

The museum has the second fossil ever discovered on display, with Pittsburgh’s Carnegie Museum of Natural History owning the first. Both were found on an archeological dig Montana’s Hell Creek Formation by Barnum Brown. Other discoveries include a confirmed footprint, fossilized fecal matter, and various fossilized remains throughout the Southwest region.

Its Arms Aren’t Really that Tiny

While everyone loves to laugh at the t-rex’s comically small arms, research shows that they weren’t as tiny as once thought. The dinosaur’s arms measured around three-feet in length and, like the rest of its body, were incredibly muscular. It is estimated that each arm could hold up to 400 pounds. If you want an ever better laugh, check out the nubby arms on a Carnotaurus.

The Mouth of a T-Rex Was Infectious

Fully grown t-rex featured massive banana-shaped teeth that could crush bones and take over 500 pounds of flesh off its victims in one massive bite. Its muscular legs allowed it to chase down prey like a marathon runner, and its arms could pick up other creatures and toss them like Lebron James making a three-point shot. While that’s all impressive, the t-rex had one other weapon in its arsenal.

As chunks of meat sat in-between its massive fangs, they began to rot. Without the ability to scrape its teeth, those rotting pieces of meat turned into a safe haven for infectious bacteria. Any creature that was bit by a t-rex and lived to tell the tale would soon succumb to death by infection from the predator’s septic bite.

At the time of the movie, scientists didn’t have the information they do today. Studies and finds have shown that t-rex had incredible eyesight and a larger brain than most of its time. Not only could it spot other dinosaurs from a distance by sight, it was smart enough to stalk and trick its prey.

A study by professor Kent Stevens at the University of Oregon discovered that the predator could see a wider distance than a hawk and 13 times further than a human with 20/20 vision. Their hearing and sense of smell was also incredible. In every sense, they were the perfect killing machine. Sorry Dr. Grant and Jeff Goldblum.

This t-rex exhibit is a short trip away from The Cole, a series of apartments changing the game on the Upper East Side. As one of the city’s most dynamic neighborhoods, fantastic restaurants and premier shopping are right outside your door. Make yourself at home with 24/7 concierge support, in-building amenities, and modern designs that create an envious appeal.

From private courtyards to an on-site fitness center and billiards room, The Cole’s selection of amenities is designed to enhance your sense of living. Residence features such as iced white quartz countertops, brushed nickel Moen features, and barnwood-style flooring create an envious appeal. That’s just the tip of the iceberg, though.

Come discover what luxury life on the Upper East Side is like. Welcome to The Cole, where the fun rises in the east.