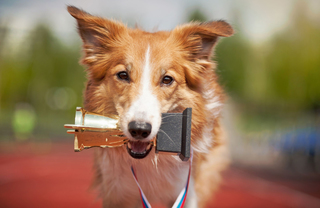 You can skip the ponies, this show is just for the dogs. The dogs, of course, and the people that love to watch them to compete in all manner of spectacular events. Residents of the apartments for rent in Manhattan know that the Westminster Annual Dog Show is one of the biggest and best around, and this year, 2018, is poised to knock the socks off of anyone who loves checking out animal-based competitions. What will you be able to expect from this year’s amazing showing? Keep reading, as we dig deep into what the Westminster Kennel Club has in store for us this time around.

First things first: what is the Westminster Kennel Club and what’s going on with this dog show? The club themselves are happy to illuminate all who wish on their history, which begins all the way back in 1877, when a group of “sporting gentlemen” made the decision to hold the first such dog show in Manhattan. From then on, it was only a matter of time before the Westminster Kennel Club formed and became the hosts of the greatest dog show the world over:

“With its spectacular beginnings and extraordinary growth in the years to follow, the Westminster Kennel Club Dog Show was quickly reflecting the growth and success of New York City. As the dog show grew every year, so did the Westminster Kennel Club’s position as the symbol of the purebred dog, with its influence being felt in show rings everywhere, and eventually in millions of television homes across the country.”

This year, the show will take place in February, with three days being of particular importance:

The agility portion of the show displays a dog’s “willingness to work with its handler in a variety of situations.” Think of it as an athletic competition for dogs that tests their “conditioning, concentration, training, and teamwork.” With their handler, dogs must navigate a series of obstacles while working against the clock, with the most agile dogs and adept handlers taking the top prize.

The agility show has three classes, which test different specific abilities: Standard Class, Jumpers With Weaves, and FAST. The Standard Class sees if dogs can identify and place a paw on the “safety zone” of a particular object in the time allotted. The Jumpers exclude the contact objects and sees dogs navigate jumps, tunnels, and weaves with great alacrity. The FAST (Fifteen and Send Time), for its part, is a grueling challenge of “skill, accuracy, speed, and distance handling.”

Obedience trials, on the other hand, “showcase dogs that have been trained and conditioned to behave well at home, in public places, and in the presence of other dogs.” The dogs on display will show these skills in unique fashion, performing a so-called freestyle routine which can include “costumes, tricks, and dance moves.” Exhilarating and fun all around.

As for scoring tickets for the show, you can find the details here. The show will take place at The Piers and at Madison Square Garden, and will have both daytime and evening sessions for the various events.

Judging For The Event

The judging panel for the competitions has already been decided. You can see the full list of the judges here, but for the main event, you want to get to know the judge for the Best In Show winner, Betty-Anne Stenmark:

“Mrs. Stenmark has dedicated a lifetime to the sport of dogs as an exhibitor, breeder, canine advocate, judge and dog club show chairman. In 1967, she exhibited a Saint Bernard at her first dog show in Vancouver, British Columbia. After breeding Saint Bernards and Salukis, she was charmed by the unique qualities of the Dandie Dinmont Terrier and for the past 41 years, she has continued in that breed under the King’s Mtn. prefix.”

There will be separate panels for the sporting breeds, hound breeds, working breeds, terrier breeds, toy breeds, non-sporting breeds, and herding breeds. They bring with them a wealth of experience and dog knowledge, and you can get a view of how the judging works by checking out some of the breed judging videos here.

The Cream Of The Crop

You might also want to stay abreast of the dogs who are topping the charts right now. The DN Magazine Top 20 keeps a month-to-month listing of the top twenty dogs, giving you some insight at some of the most fearsome competitors that are out in the field. Topping the list at the moment are the Giant Schnauzer, Puli, and Cocker Spaniel, with the Bichon Frise and Akita just behind.

As for who’s got a spot in the big dance, you can check out the lists of 2018 invitees here. It’s broken up into the obedience invitees, breed invitees, and junior invitees, with a wide range of competitors across all categories. All told, there will be some 3,000 dogs taking part in the various events, making for a thrilling show in which only the best representatives rise to the top.

Now, you could snag a few tickets to the show, head down to Madison Square Garden, and see everything unfold from a seat in the crowd. If you’d rather not leave the apartment, though, you should keep in mind that the show will also be broadcast on TV and online as well. Fox, Nat Geo, Nat Geo Wild, and FS1 will be sharing the event, and if you’ve got the right accommodations at home, it will be just as enjoyable an experience.

At places like The Cole, the “right accommodations” come standard, with a range of a floorplans and features to make living in Manhattan the dream you always wanted as your reality. Check it out, and mark it down as your new place to reside in the city.