Your Guide to Sagamore Hill 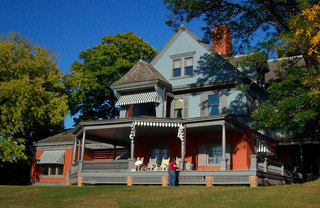 New York City is brimming with historical sites from parks to buildings and piers. Step outside any of the luxury apartments in NYC and you’ll find a place to explore on nearly every corner. One point of interest for the historically inclined is Theodore Roosevelt’s Sagamore Hill. If you’re interested in learning more about the site or planning a visit, then consider this your guide.

What Is Sagamore Hill?

As the years went on, he continued to return to the area to hike, swim, ride horses, and row. Roosevelt went on to attend college and graduated in his early 20s. At the same time, he began to start a family and wondered where the best place to raise his children would be. With fond memories of his childhood summers, he decided that only Oyster Bay would do.

Roosevelt purchased a slice of farmland just east of Oyster Bay in an area called Cove Neck. Here, he dreamt of creating a large, modern home for his family. As a man of action, it wasn’t long before he hired local architects by the name of Lamb and Rich to get construction underway. Their plans for the house were based on their 1884 Queen Anne-style sketches.

Not a month later, however, Roosevelt was struck by tragedy with the death of his wife Alice. After giving birth to their daughter, she passed away two days later. Stricken with grief, Roosevelt had no intentions of continuing the construction of his home in Oyster Bay.

It was Roosevelt’s family who helped him endure this loss and convinced him to continue his plans with the house so that he would have a wonderful home to raise his daughter in. During the building process, Roosevelt was reacquainted with an old flame by the name of Edith Kermit Carow in 1886. The two quickly got engaged, married, and moved to Sagamore Hill in 1887.

Together, Edith and Roosevelt would raise six children in their new home and share 30 wonderful years as a happy family there. From 1902 to 1908, Sagamore Hill also served as Roosevelt’s summer home away from the White House where he hosted luminaries from around the world.

On January 6th of 1919, Theodore Roosevelt passed away at his Sagamore Hill home at the age of 60. Edith remained in the home until her passing in September of 1948 at the age of 87. While traveled extensively in her later years, the home remained a private getaway for her and the family. Ted, Roosevelt’s oldest son, even built a home on a few acres of nearby land known as the Old Orchard House.

Sagamore Hill still stands as the ex-president’s home and a national park where visitors can enjoy the same wildlife and beauty that Roosevelt enjoyed in his youth. From events to leisurely walks, this is an excellent day trip for anyone living on the island of Manhattan.

Sagamore Hill’s park is a diverse location marked by woodlands, open fields, beaches, and salt marshes. Together, these elements combine to foster a wide variety of wildlife. Roosevelt extensively documented the wildlife in the area, but researches continue to record and study the ecosystems throughout the park.

You’ll find plenty of birds on your visit ranging from the Winter Wren to the Great Chested Flycatcher. Ruby-crowned Kinglets and Yellow-billed Cuckoos dot the trees. In all, there are 116 documented species of bird at Sagamore Hill.

Head over to Heron Pond and you’ll find six species of dragonfly alongside two species of damselfly. There are over 21 of each type in Sagamore Hill, spread throughout the mix of ponds and salt marshes. Comet Darner, also known as Anax Longipes, is one of the rarer in the world. Other insects include spiders, centipedes, and millipedes.

Native plants in the area have declined over the decades due to invasive plant species. Urbanizations has also impacted the ecosystem, but recent efforts have helped to foster new growth. As native species take back the park, an influx of Monarch Butterflies and over 50 types of bees have found a new, thriving home at Sagamore.

Through the park’s website, you can plan your visit based around a variety of events. Popular events include the Battle of Gettysburg Anniversary, the Fourth of July, the 15 for 50 Hiking Contest, and guided tours that focus on the historical significance of the park.

Several educational opportunities exist for children and students, as well. Every Kid Outdoors and the Teacher Ranger program are popular options for educators, while kids can become junior rangers and enjoy camping with their families. All events aimed at youth are geared towards preservation education and living a healthy life by getting outdoors.

Visiting the park is free, but some events cost money to attend. The park offers annual passes for all events at the price of $80 and $20 for seniors. Seniors can also purchase a Lifetime Pass for $80. Fishing is also permitted in certain parts of the park.

Sagamore Hill is an excellent daytrip from The Cole, the Upper East Side’s premier destination. Join one of the city’s most dynamic neighborhoods as you enjoy fantastic restaurants and shopping just minutes from your home. These newly renovated apartments feature the finest in modern finishes, in-building amenities ranging from a billiards room to rooftop terrace, and 24/7 concierge support for an elevated sense of living.

Welcome to The Cole, where the fun rises in the East.